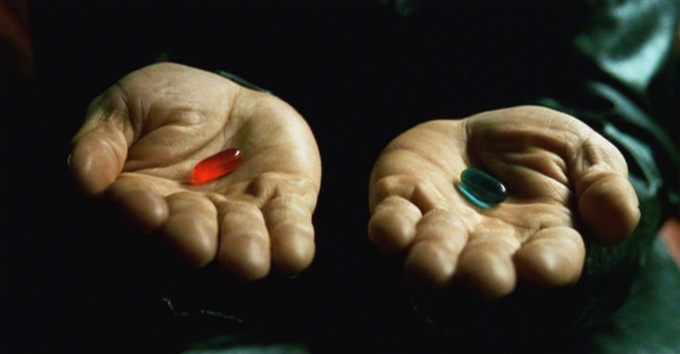 I thought I’d follow up my previous post on the “Red Pill/Blue Pill” philosophy being propagated on the internet in the so-called Manosphere.

I won’t completely recapitulate what Red Pill/Blue Pill philosophy and the Manosphere are in this post, but feel free to read what I had to say in describing what they are here:

In this post, I want to just express how silly I think the Manosphere and this philosophy truly are.

The Manosphere is extremely juvenile.

I spent a fair amount of time perusing some of these Manosphere forums and YouTube videos (the Manosphere is all over YouTube, seriously, if you watch one video, the algorithm suggests 1000 more on the subject), and I felt like I was back in high school where superficial hierarchical thinking is on full display.

This is because of all of the in-group/out-group posturing you see in the Manosphere.

The terminology and jargon used in the Manosphere alone proves my point.

Firstly, the different types of men:

-The Alpha Male (or just “alpha”), the top tier of men on the hierarchical mountain. This where you will find the “Chads”, or the archetypically handsome and assertive men who can and do get all of the women they want at the expense of…

-The Beta Male (or just “beta”), the middle of the hierarchy who are the feminized “nice guys who finish last” who further act as “white knights” that defend the “feminine imperative” and never get the women they desire until the women “hit the wall”, or in other words, get older (as in between the ages of 25-35, as if that is old, really?!?!) when a woman starts to lose her looks (?!?!) and must shift her priorities from partying with “Chads” who don’t care for her and will never marry her and must now secure a man she found less desirable in her younger years (the beta) who can now provide for her and any children she has. I might add that the female equivalent of a Chad is a “Stacy” and a black Chad is a “Tyrone”.

This silliness is summed up in the Manosphere phrase “alpha fux, beta bux” (how juvenile is that?). To be clear, according to the Manosphere, women, especially women in their prime years, want the Alpha Male, who isn’t necessarily “alpha” when it comes to being able or willing to provide and reject the beta who likely is willing and able to provide, but isn’t exactly as aesthetically or sexually attractive as the alpha.

-The Omega Male (or simply “omega”), the proverbial bottom of the barrel man who couldn’t get a date (much less a wife) if one landed in his lap at a strip club (because she’d be too repulsed to stick around). You will find your incels (involuntarily celibates) and a large number of MGTOW (Men Going Their Own Way) at this level. Not even “Becky” (an average to below average female, the antithesis of a Stacy) will date or marry any man on this level.

See how silly all of this sounds?

Lastly, to be red-pilled is to know the incontrovertible truth about so-called female nature and to be blue-pilled is to remain ignorant, sometimes willfully so, of female nature, thus setting yourself up to be grossly taken advantage of by women.

Even the terms red-pilled and blue-pilled show how all of this is the result of dichotomous thinking combined within an in-group/out-group hierarchical structure that only serves to reinforce and/or confirm biases.

The Manosphere thinks that there is a deep and sustained effort by the powers that be in this country and throughout the western world to promote feminism at the expense of masculinity.

I’m distilling the breadth and depth of all of this for the sake of brevity as well as to maintain my own sanity, but this sort of thinking does not stop at just opposing the feminist agenda. As I said in my previous post, the Manosphere promotes a great deal of misogyny and racism veiled in a veneer of ostensibly plausible narratives that are based upon actual and factual aspects of male/female interpersonal relationship dynamics.

The Manosphere is comprised of men who are jaded, bitter, and feel they have no control over their own lives and thus turn to themselves and so-called Manosphere gurus who simply take advantage of them to make money by selling these poor souls books, coaching sessions (which can cost thousands of dollars), and seminars (again, which can run into the thousands of dollars per person) all in a desperate effort to reclaim something that they either never had or simply does not exist.

Human beings in general and women in particular are extremely complex creatures. To think that interpersonal relationships can be adequately explained and delineated on the tenuously constructed framework the Manosphere believes in would be laughable if it weren’t so sad.

I am of the opinion that there is someone for everyone and Chad and Stacy hardly have the sexual marketplace cornered. It’s kind of up to you to be the best person you can be and accept the people who accept you for who you truly are.